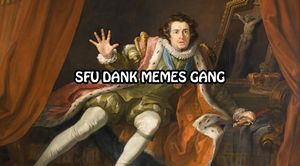 The SFU Dank Memes Gang is a Facebook private meme group that was created in May 2017 by Junho Kim. It started to gain traction among SFU students during the impeachment of the SFSS President, Jas Randhawa, and the subsequent SFU-UBC Meme Wars that followed.