Difference between revisions of "Faces- Revision"

The door opened, a new guy came in. His head tilted and bowed towards his left shoulder. His long hair blocked almost half of his face. The eyes behind the hair were soft and gentle. His smile looked shy like a girl. He wore a white patient clothes with long sleeves. His arms were positioned across his chest, and the sleeves were tight up behind his back. Those clothes are special made for people who are capable of violence. But, he did not look like he would hurt anyone. What is the reason for him to be in this rehab? After the first meeting, I realized, if he is not in that body, he would be a girl definitely. A woman trapped in a man’s body. So, call him a “she” might be more appropriate. 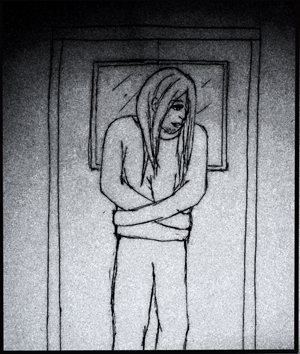 After few days of her arrival, she was taken to the room to meet me for the second time.


I set up the recorder. “Sorry that I couldn’t really talk to you last week. How have you been? Still getting used to here?”


“Emm, it’s fine, I guess... I feel a little scared at night...” Her head was bowed, and she kept playing her hair with her fingers. Suddenly, she looked at me, “But lucky that my brother is here for me. He said he would go wherever I go.” Her smile lighted up the room.


“Your brother is here too?” Building up a trusting relationship is an important step for communication between doctor and patient. I did not expect that she would talk to me just like that. But, she is not offensive like other patients.


“Yea, he loves me so much. He always comes to check on me.” If I did not know she was talking about her imaginary brother, I’d think she is deeply in love with this man because of the expression on her face.


She bowed her head and falls into silence.

“Tell me what happened between you and your boyfriend.”


“What happened? I would not tell anyone about this. I just want to help you.”


“...He...I couldn’t breath around him. The air was so heavy around him. I couldn’t talk to other people. I couldn’t have friends. He even tried to drive away my brother! He said my brother is not real. I didn’t want to live with him any longer, but he wouldn’t let me leave! I hated him. I was all alone because of him! I hated him!”


“That’s the reason you killed him?”


“No! My brother did it. He said he is the only one who truly loves me.”


“If your brother did it, why did you hold the knife when police got there?”


“You know that was your fault too. If you don’t tell me the truth, I’m afraid that I can’t help you anymore. That’s what you are hoping for? Tell me, do you really have a brother?” I thought I could push her more for more information, but, I might broke the trust by saying this.


She finally lift her head, and cried, “I don’t know why you don’t believe me. I have a brother, for real. But... he never talks, it’s like no one can see him. I don’t know what happened. Please! Believe me.” Then, she was desperate, which made her to started mumbling with tears on her face. I can tell, she could not take it anymore.


I couldn’t ask her more questions that day. After sent her back to her room, I asked the permission to do all day observation recording on her.


According the recording, the first two nights was normal. On the third day, she was woken by someone. She was trying hard to wake up. For a moment, she was blanked out. And then, she was so excited and leaned forward. She surrounded herself with her own arms. At the same time, the expression on her face changed. It was obvious, that was a man. A man fits this body. It’s not her imagination. That is another personality, the male version. They both exist in the same body.
About a month after, her feminine personality is disappeared. But I just started the treatment, so it must not be the medicine’s work. Now, she is “him”. I requested to meet him.


“She’s dead.” He looked at me without dodge. His face looked hard as iron. I could not tell the emotion from his face.


“I killed her.” His face showed no regret. Is this the man hugging her gently with love that night?


“Why? Don’t you love her? You said you would always be with her.”


“Yes. I said it. But she was too weak. She blames her boyfriend’s death on me. She was the one asked me for help. That selfish monster tried to get rid of me. She didn’t want to leave me. I told her I would never leave her. So I killed him to free her! But, after her boyfriend’s death, she cried a lot. Her guilt made me jealous and crazy. I couldn’t let her live in the pain! So, I freed her. I helped her!” His eyes filled with blood streaks and tears. His hands clenched and rubbed together against table. The physical pain could not compare to the pain in his heart.


“But now, you are in the pain, and you can’t be with her anymore.”


Time was up before I could say more, securities came in. They were going to take him away to his room. He turned to me at the door, and said, “I will keep my promises.” I looked at him until he disappeared in my sight.


Few days later I heard from the rehab, he committed suicide in his room. He banged his head against the wall and bleed to death. Blood painted the wall and floor into bright red. I remember, he said, “I will keep my promises.” He went to take care of her, and be her side in the other world.