YouTube, as most people know, is a video-sharing website that holds videos of any kind, ranging from ‘how to’ videos, to professional short films, to daily video blogs. With forty-eight hours of video uploaded every minute, which is equivalent to nearly eight years of content uploaded every day, YouTube has become from an ordinary video-sharing website to the third most visited website of all time, which also connects people around the world (YouTube, 2012a). Due to the international connection YouTube provides, ordinary people who uploads videos on the website can become celebrities overnight. An example is Gary Brolsma, who created a video called ‘Numa Numa Dance’, which despite its quality and origin, the video is known as one of the first Internet memes on YouTube that brought communities together creating a global form of cultural hybridization. The ‘Numa Numa Dance’ video is not only a popular video, but it is also an example of how an unexpected and unprofessional video can become the beginning of an essential aspect in people’s lives such as global connection among societies through online network. 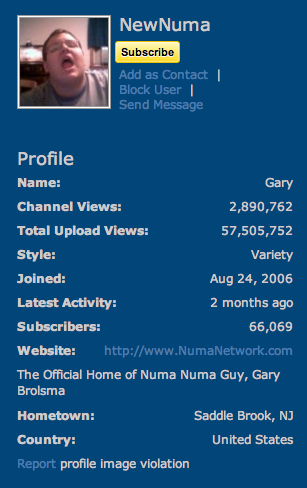 In November of 2004, 19 year-old Gary Brolsma, an amateur videographer from New Jersey (Feuer & George, 2005), decided to make a webcam video of him lip-syncing and dancing to the song ‘Dragostea Din Tei’ by the Moldovan band O-Zone (Wesch, 2008). The idea started by Brolsma deciding to make a humorous and joyful video to send to his friends in order to make them laugh as well as to lift the depression he was suffering after his father’s death (Wesch, 2008). However, without Brolsma being aware of his video, his friends started to forward the link to other friends until the video reached the communities of YouTube in 2005 (Brolsma, 2012). The video was first submitted on a website called Newgrounds in 2004 since YouTube was not available at that time. After several weeks, not only had the video reached an incredible amount of total ‘shares’—the amount of times users have posted the video to their own individual profiles—but it had also been seen 700 million times on YouTube, including several duplicated videos (Numa Numa, 2010).
Because of the magnitude of its shares, views, re-makes and imitations over the course of time, the ‘Numa Numa Dance’ video is considered one of the first memes on YouTube. The video became well recognized on YouTube almost immediately after it was uploaded and it is considered a successful meme. By definition, a meme is “a unit of information in a mind whose existence influences events such that more copies of itself get created in other minds” (Brodie, 1996). A successful meme “can be compared to a cultural virus that "infects" a growing group of hosts” (Chielens & Heylighen, 2005), which is “ability to [spread] easily throughout the population” (Brodie, 1996). In addition, natural selection or the Survival of the Fittest theory determines the popularity of a meme. On the other hand, several characteristics considered by Dawkins (2006), evolutionary biologist who coined the term meme and author of The Selfish Gene, for a successful meme are copying-fidelity, fecundity (number of copies made per time unit), and longevity (duration that any copy will survive). 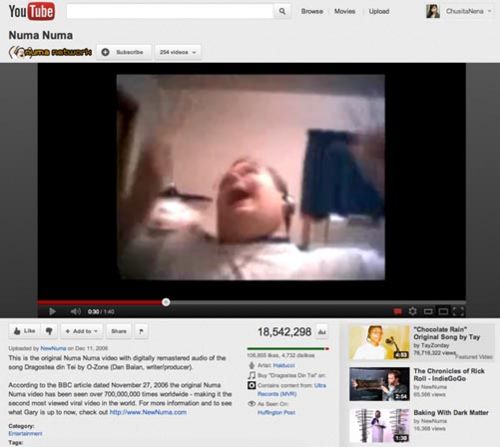 According to Brodie (1996), the most interesting memes are the ones related to behavior because this particular type of memes trigger people’s secondary drives, which may vary from person to person but these are always connected to various strong feelings. Likewise, memes’ evolutionary advantage for replication occurs when the behavior they cause attracts attention, annoys, or scares people. Equally interesting, are the memes that evoke familiarity within the audience, making the meme stand apart from the plethora of online content with an established similarity. These memes are unique in that they are apart from the rest of the population, not simply mimicking what other people do. In Brolsma’s case, the video about himself lip-syncing, throwing his arms around, and dancing at the songs’ rhythm without leaving his chair created a feeling of unusual and uniqueness content for the people on YouTube. Brolsma lip-syncs ‘Numa Numa’—derived from ‘nu mă, nu mă iei'—which translates to ‘you don’t want, don’t want to take me’, which is a lyric from the song ‘Dragonstea Din Tei’ (Numa Numa, 2010). Brolsma introduces the audience to those unusual words and phrases, and changes them into more familiar-sounding ones, which makes it easier and quicker for people to notice. For instance, transforming the lyrics from the original song ‘Si te rog, iubirea mea primeste fericire’ (O-Zone:Dragostea Din Tei, 2006) into something more familiar-sounding such as, ‘She tear, oh. You be the man, who smashed the feta cheese’ (Sbrools, 2006) allows an English-speaking audience to better enjoy it. The video was a total success since not only the song was known and brought to America because of Brolsma, but also because he started to do something people would not normally do, which consisted in somebody filming their self with a webcam while lip-syncing to an international song. Even though Brolsma was not able to pronounce the correct lyrics to the song, nor did he know the meaning of them, he did not give up and made the currently famous Numa Numa video meme (Know your meme, 2011). Along with this, Brolsma achieved his original goal of choosing a song and creating a video that he hoped his friends would enjoy in the same manner that he did when he heard the song (Numa Numa, 2010).
‘Pop-cosmopolitans’ is a term used to describe people similar to Brolsma, who find interest for international music, art, and dance (Jenkins, 2004). Although people enjoy other cultures, this does not necessarily means that people will understand those cultures, or that they are willing to learn more about them. A reason why people will not understand other cultures is because those individuals pick only those aspects and pieces that they like or suits them (Jenkins, 2004). In this case, millions of people around the world have done imitations, remixes, and cartoons of the Numa dance and Brolsma’s performance, but it does not mean that those people want to learn about American culture or in the case of Brolsma himself, to learn and understand the Moldovan culture, which is where the original song comes from. Although several people who created videos related to the ‘Numa Numa’ video are most likely not thinking about the cultural aspects behind the original song, they still create this type of videos because of several reasons such as entertainment purposes, boredom, as well as to follow current trends and memes. Currently, one of the main goals for several YouTube users who create videos is to acquire considerable high amounts of views, shares, likes, and positive comments about their video as well as getting people to add the videos in their playlists in the favorites section.
For the majority of the YouTube community, the services for uploading, sharing, and browsing videos are free of charge. This cost-free sharing service is beneficial for the extensive worldwide flow of international videos to flow on the Internet, bringing people from around the world and with different cultures together (Jenkins, 2004). With his video, Brolsma created new forms of community and global connection among YouTube users. The connection that Brolsma brought to YouTube was a new media phenomenon, since nobody thought about connecting through an online-sharing website until the ‘Numa Numa’ video started to flow on the web (Wesch, 2008). Moreover, the user-generated records take on a new significance because users post their own content and start to connect with others through a system of hyperlinks and keywords, allowing users to search and browse between related content (Gane & Beer. 2008). At this point, the video became extremely popular that ‘Numa Numa’, ‘Numa dance’, and Gary Brolsma were the most searched keywords on YouTube (Know your meme, 2011). The unprecedented popularity of the ‘Numa Numa’ sensation later provoked people to create their own videos of ‘Numa Numa’ by imitating Brolsma and the popular dance by producing similar or new content related to the popular meme.

Afterward, the viewers and followers of the ‘Numa Numa Dance’ video created numerous mixtures of cultures by mixing the Moldovan song with their own cultures. Some examples that emerged from the popular meme are cartoon animations about cats dancing to the song from Japan, misheard lyric videos from the United States, and people dancing, singing and lip-syncing to the song from around the world (Youtube, 2012b). Furthermore, video responses, remixes, and parody videos of the Numa dance submitted by YouTube users started a new global connection uniting individuals with a simple song, poor dance skills, and a click of the mouse. 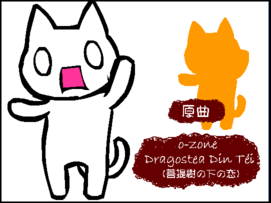 The expansion of YouTube is connected to the rise of Internet technologies that not only enable users to have access to public data, but also to archive their own lives almost simultaneously (Gane & Beer. 2008). Although in these videos, where people either archive their own lives or make animations about specific topics such as the ‘Numa Numa’ are private; nonetheless, once they are uploaded to YouTube, they become public and accessible to the rest of the world (Gane & Beer. 2008). Certain people start by making videos with the intention of having them as private films but later on, they can submit them on websites similar to YouTube to make them public for various personal reasons such as showing memorable moments to other members of their family. On the other hand, several people create numerous videos like Brolsma and the ‘Numa Numa’, for the sole purpose of making them public.


According to Andrew Keen (2007), the author of The Cult of the Amateur: How Today’s Internet Is Killing Our Culture and Assaulting Our Economy, the user-generated world of Web 2.0 threatens to bring an end to what is known as “informed citizenship” by misleading traditional ways of distinguishing between an expert and a new user (Keen, 2007). An expert is a person who has a significant amount of knowledge on a certain subject, and knows the specific item completely whereas a new user is a person who just started to have contact with a specific subject and barely has sufficient knowledge about it. In addition, Keen discusses on how recently YouTube videos are starting to kill our culture with amateur videos/movies showing poor content concerning people performing everyday activities (Keen, 2007). Moreover, open and collaborative projects where users become responsible for generating and consuming the content define the interactive world of Web 2.0 (Beer, 2006). Therefore, it can be said that Brolsma is responsible for the initiation of the creation of user-generated videos on YouTube as a result of his popular video becoming a meme and tempting people to create new videos related to his video.
Subsequent to his rise on the ‘Numa Numa’ video and becoming one of the first internet memes on YouTube, Brolsma created his own website called, the ‘Numa Network’. Not only did he start his own website, but Brolsma also sells merchandise related to his meme displaying a cartoon of himself on several items such as t-shirts, hoodies, mugs, messenger bags, and hats (Brolsma, 2012). Years later, Brolsma made a new video about his return and posted it on his website, but it did not achieve the same level of notoriety because the YouTube community and his previous followers thought it was not as good as the first ‘Numa’ video, which soon started to fade away (NewNuma, 2006).
In conclusion, Brolsma’s first video will be considered the YouTube meme that built a global relationship between people around the world, sharing Brolsma’s happiness and joy. ‘Numa Numa’ established the trend of bringing people into the YouTube community in order to start filming their own videos related to this popular meme. Besides sharing happiness and a new trend, Brolsma and the individuals who commented, shared, and created videos related to his meme started and helped global online network communication to grow into an unexpected mixture of cultures by integrating different aspects of each culture and country.