The meaning of social media network has changed since the creation of the Internet. Millions of information are being recorded and exchanged around the world every second, dispersing in multi-directional flow around the world.[DN: PG, SC] In 2005, Steve Chen, Chad Hurley, and Jawed Karim created a social media site that took the means of 21st century communal media to higher level – YouTube, a site that “allows billions of people to discover, watch and share originally-created videos” (YouTube, 2012).[DN: SC, PG] In this new media era, televisions and radios are no longer the dominant medium to spread information. Social media such as YouTube abandoned the traditional structure and authority constraint; the founders strove to empower and inspire the users rather than the government around it. With that vision in mind, the YouTube phenomenon had begun. To this day, 8 [eight] years worth of content are being uploaded, and 3 [three] billion videos are being viewed daily (YouTube, 2012). To understand the impact this social media has on individuals, this essay will take a closer examination of a particular YouTuber (partners of YouTube), who had taken the advantages this medium offers, used its multi-directional influence, formed vast networks, and built a viewer-base that can be seen as subcultures.[DN: SC, awkward use of 'subcultures']

Amongst the hundred thousands of Youtubers, [DN: PG, incorrect use of italics - use italics for publication titles.]  Shay Carl Butler, a 28 year old husband and father, recognized the influence of social media, and the speed and range that information travels on YouTube. With that recognition, in 2008, he began a recreational weight loss channel, called Shayloss, that featured himself on loosing [SP] weight and giving words of advice and encouragement to audiences that are interested on channeling in.[DN: PG, PW] Because of the high acceptance of this new way of communicating in a media-saturated society (The Media and Modernity,Thompson, 1995), [DN: PC] he slowly gained subscribers to his channel and built an audience that is not only interested in joining his journey on losing weight, but also his despite the lack of actually physical or face-to-face interaction.[DN: SC, PG] In January, 2009, Shay announced to his audience that he is going to devote his 29th year to making a daily ‘vlog’, video logs, committed to uploading a video everyday as a personal goal. This channel was called Shaytards, featuring his wife, 3 young children, and himself. Within months, Butler’s subscribers increased substantially and enabled him to have partnership with YouTube that paid him based on the view counts the videos have.[DN: SC] Because of the ability of urban media that allow people to communicate regardless of locale, he gained a million plus subscribers around the world since he started 3 years ago. [DN: define and reference 'urban media'] The earning from his partnership had allowed him to become debt free and to sustain his family just by filming his daily life. A decade ago, no such job description is ever heard of, yet his family is an example of how jobs traditional titles have evolved.[DN: PG, SC] Many audiences had asked them why they don’t participate in any television reality show since they have earned a stable audience that will tune in. Butler answered, “YouTube is the new thing. We don’t need a camera crew following us all day long. The beauty about YouTube is that it gives the freedom and control of what we want to film.” Butler’s answer to this captured the core idea of the diminishing influence traditional social media had prior, and the increasing power and participants of other social media means such as this. 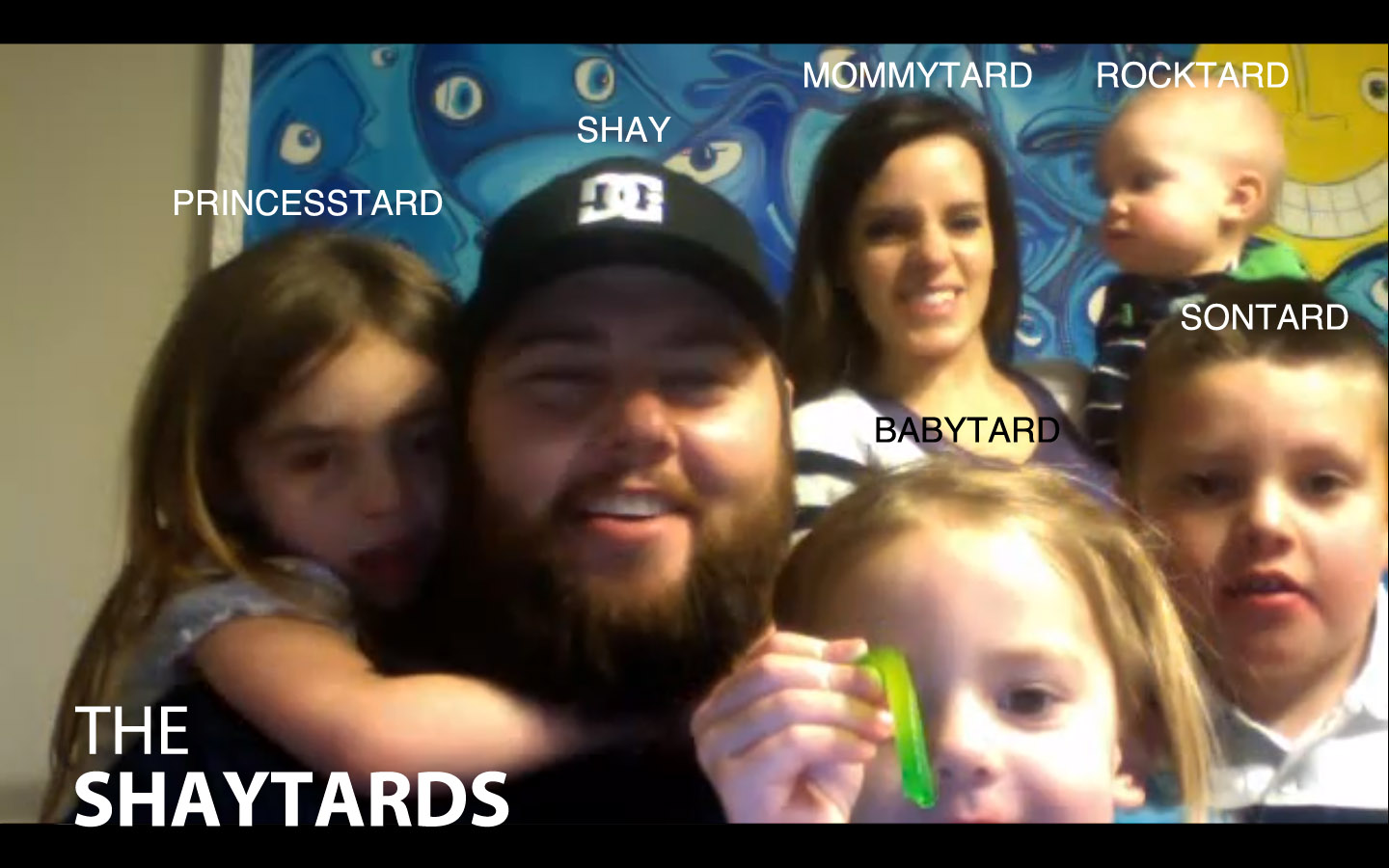 Over time, the success of Butler’ channel has raised many controversial questions about the impact this brings to his family. Many discussions and studies have evaluated the effects of casting children on reality TV shows. Inevitably, viewers raised concerns, especially for his young children who are practically growing up in front of the camera before they even have the cognition to recognize what they are being exposed to, as his channel closely resembles a reality show. Despite the audience’s critics, Butler followed his own judgments and carried on with his belief on the opportunity YouTube’s platform provides. Over the past 3 years, his supporters and loyal audience came to an understanding and appreciation of the benefits of this modern medium; YouTube freed users from having to cooperate with the traditional ways and politics of broadcasting. Out of the Shaytard’s own will, the viewers were able to witness numerous life events, such as the day they became debt free, the birth of their fourth child, or the night Butler had to explain to his daughter about death and their religious believes.[DN: SP, PG, SC] The audience as well as the Butler family gradually learnt to adapt to this life-integrated exposure and new way of interaction. It is no longer a film crew filming a family, with a passive audience watching on a television screen. Instead, for the Shaytards, the audience’s direct participation took a major role in their success, as it is an interactive reality show. The children of the Shaytards have grown to know that they are ‘famous’ and the cameras they talk to are actually a representative of million plus audiences. The interaction between the viewers and the producer created a simultaneous learning curve that is rarely seen on any other social medias; as much as there may be consequences of exposing their lives to the world, with the right attitude and management, Butler managed to outweigh the negatives far beyond the viewers concerns on this unique platform. 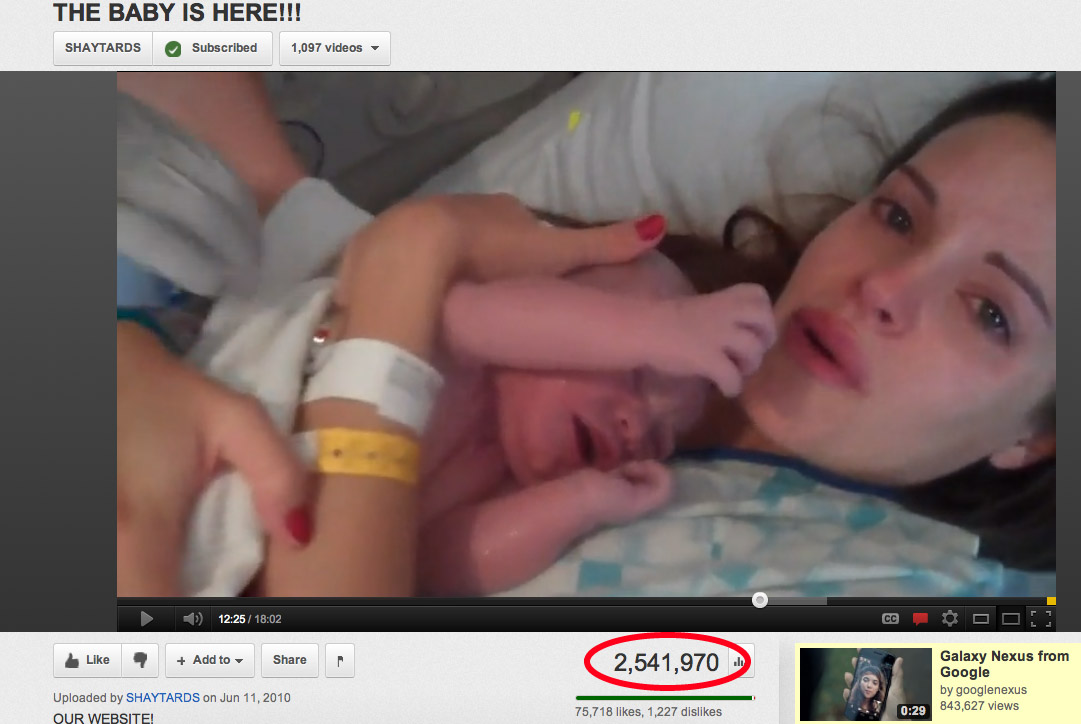 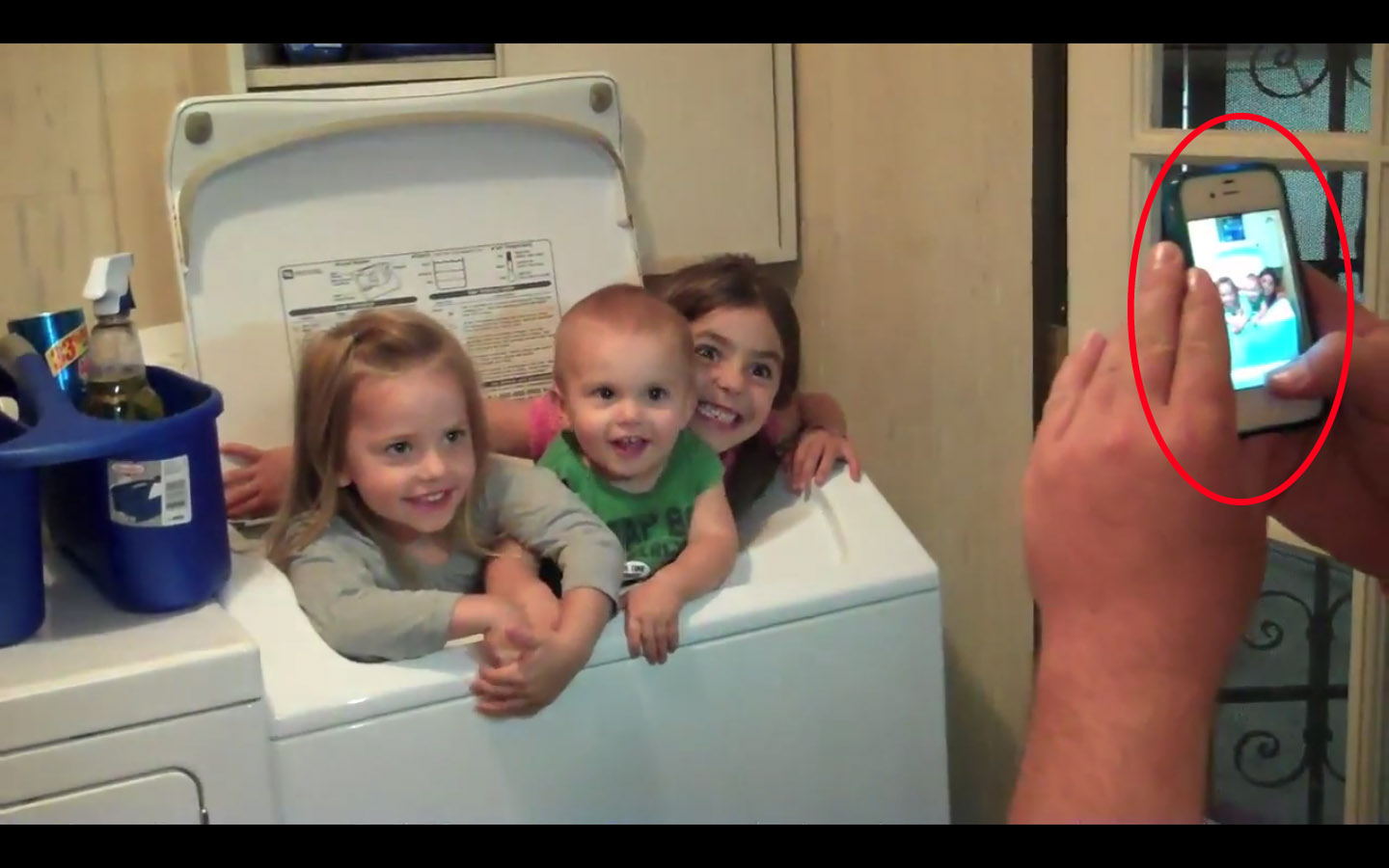 John B. Thompson, author of The Media and Modernity, notion that “media have breathed new life into tradition, […], embedding them in cultural diaspora and providing individuals with sources of identity which are no longer linked to particular locales.” (Thompson, 2005).[DN: PC, PG, SC] Perhaps this is explanation to the attachment the audiences have towards the Shaytards. The individual needs to find identity and to connect with others no longer require any physical interaction. The act of viewing the Shaytards online is enough to fulfill that need, especially when location is not of concern. Much like theOtakus of Japanese anime fans or even Hollywood movie fans, the audiences of the Shaytards may be looking for an escape from their own reality. Moreover, their act of seeing and solving problems is the roots of subculture emergence and formation. (A General Theaory of Subcutlures, Cohen, 1997). Whether it is the fatherly figure Butler portrays, or the family love of the Shaytards the viewers are searching for, YouTube has provided a environment for them to participant in the Shaytards’ lives as they watch how others are coping with their life problems. As Butler continues to film his family’s daily lives, the audiences continue to partake in commenting on and evaluating the videos. From this interaction, fans confided in each other and to the Shaytards on the impact they had experienced, creating an on-going and on-growing fan society that evidently own similar value systems and personalities across cultures. This communication media drove the participants to form new social relationships and ways of relating to one another and to oneself (Thompson, 2005).

Furthermore, through YouTube, Butler has met other YouTubers that are involved in the network, joining in the subculture that has formed amongst people with similar interest and situation. Other YouTube sensations such as NicePeter, KassemG, LisaNova, and Bret the Intern, all have migrated into Southern California where the industry has been flourishing. Butler is also one of the founders of the Maker’s Studio, a production company that helps YouTubers to produce high quality clips, slowly expanding this industry. The success of the Shaytards inspired Butler to create more channels. Outside of Shayloss and the Shaytards, he is also owns minor channels such as the original Shaycarl, his wife’s channel Katilette, and a podcast channel of him and his wife called WhenTheKidsGoToSleep. Instead of having to go through paper works and proving financial stability before opening a franchise of a company, Youtube has allowed its users to do the act of franchising just as by a simple registration. Now that the Shaytards had created their own subculture and fan base, it is easy for them to branch out to other channels that gain another source of income. The efficiency and power of network society is only moving forward, as Butler success drew in more pursuers into the YouTube community. The past year, his younger brother’s and sister’s family also moved to California, a city of high media concentration, forfeiting [DN: PW] their previous lives and jobs. Majority of the Shaytards viewers are also subscribed to his siblings, as they possess similar attractions. To this day, all associated channels of the Butler family are on the Top 25 Subscribed Channels on YouTube. (YouTube, 2012). 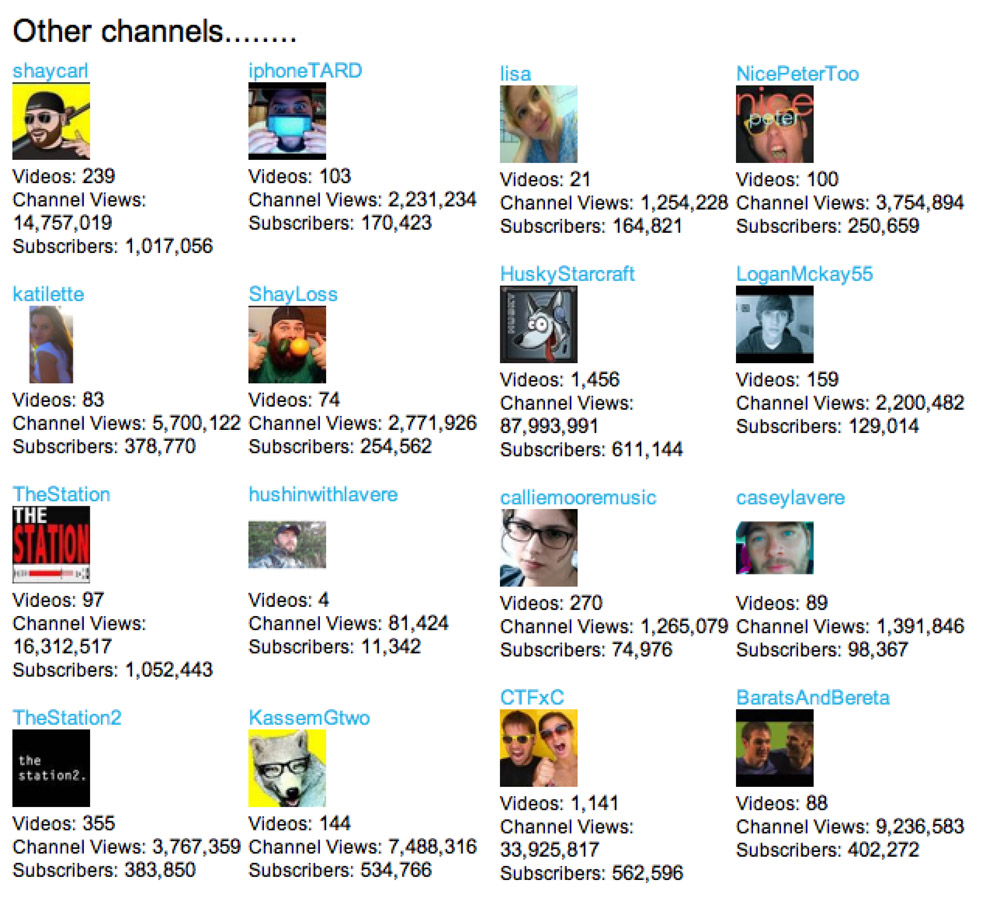 CITATION [DN: 'References' would be a better word here]

Introduction/thesis statement or topic: Good attempt, but needs some rewriting to improve the style and clarity. You have introduced the concepts that will be used in the essay, which is a positive.

Body – paragraph structure: Each of your paragraphs appear to have a topic, but need extensive rewriting to remove sentence structure and grammatical errors. You also need to look at setting up transitions to the next paragraph so you can eliminate the subheads.

Conclusion: You shouldn’t be starting any paragraph, particularly the concluding paragraph with ‘Furthermore.’ CWH.

Unity, coherence & flow of writing: Doesn’t flow well from one sentence to the next, let alone from one paragraph to the next.

Application of concepts: Concepts are mentioned, but not defined nor used well. You need to reference the definitions from some academic sources, and then use and integrate them better within your text.

Appropriate style (voice and diction): This does not really meet the criteria of an academic essay in the style of language used. And academic essay typically has a higher level of sophistication in the language used, as well as more complex language.

Sources/citations: CWH for detail of citation style. Details are important! You should be using a wider range of sources for this essay.

Spelling/grammar: Considerable number of grammatical errors throughout. Have only indicated a few of them. Some spelling errors as well. Careful proofreading is important.

A good start, but there is a lot of work needed in your rewrite. Look at the structure of each paragraph and what the purpose of the paragraph is, then rewrite it. You probably need to be discussing with the Student Learning Commons how you can be improving your fluency in the use of academic English.