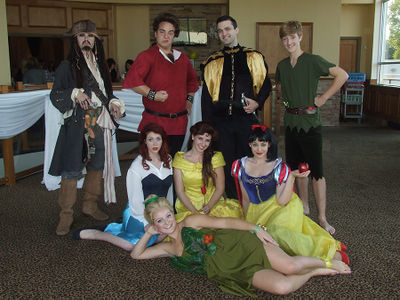 Disney Cosplayers at the Charity Banquet for Cops for Cancer

The diverse community of the anime fandom has a unique universe that is an entirely separate entity from reality. In a fictional world full of animated characters, whether they are cartoons or from Japanese manga novels, young teenagers and adults alike accept these characters’ behavioural depictions, which are based on real life situations that people can relate to. Many of the categories of these fictional plots from TV shows, books and movies appeal to certain audience. In some cases, individuals develop a strong attachment to a particular series or character, creating bias choices and disputes within discussions. However, one I considered to be the most interesting about anime fans is their live action performance called cosplay. This case study explores the cultural movement that makes an impact in social communities of cosplayers’ image portrayal in bringing animated characters into the real world.[DN: Okay, and also introduce the concepts you are going to use to explain and analyse cosplay.]

Originateding in Japan, the merging of ‘costume’ and ‘play’ became the definition of a common cultural practice. Cosplay is “the act of dressing up as characters from popular animation, film and videogames” (Newman, 2008, p. 83) and where people engage in roleplaying to embody the character that they are portraying. According to Newman, the act of “literally stepping into their shoes and taking control” (p. 84) is a way of art. By transforming themselves into their character, cosplayers are able to unleash their imagination and incorporate that form in the real world.

DN: Good start, but there is a lot more I presume you have to do on this. Make sure to integrate the conceptual framework and images.

Without further work, a very generous grade for this on resubmission would be D, though it probably should be an F as it doesn't meet even the minimum standards required.