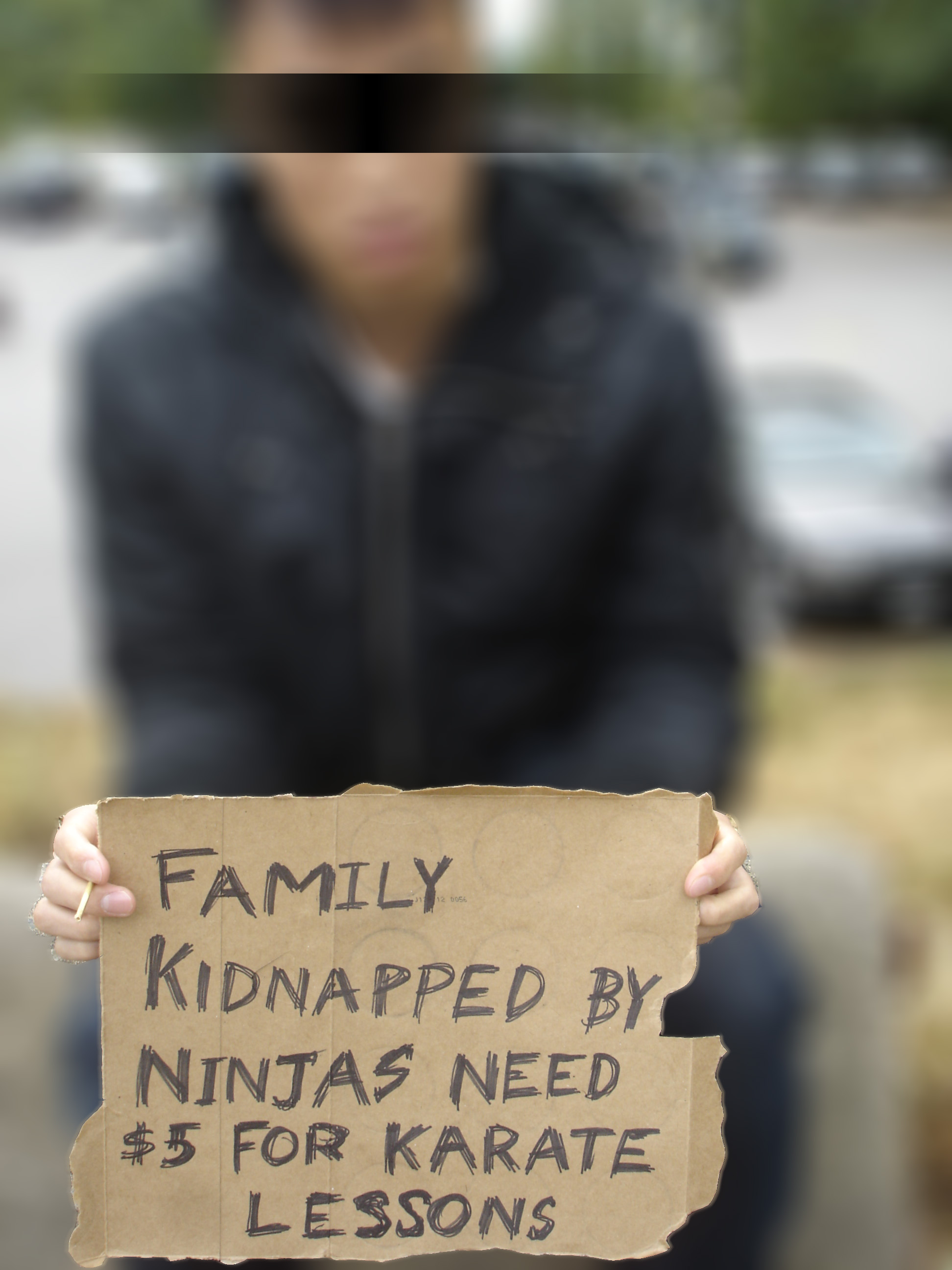 BEGGING FOR LAUGHS OR MONEY

Begging has taking its course in the contemporary sphere of the streets.  Where homeless people who have a found a creative form of asking for money have altered the semiotics of urban labour.
Production, in this case, is a means of labour. It is the ability to improve one’s economic status with the form of creative begging while simultaneously changing the act of street begging into a sense of mild and free entertainment without losing the goal at hand – production. The labour, done by the ‘comedian’ on the streets, is a custom of finding a living through the transformation of public begging with a unique discretion.
Joe is unemployed scrounger that spends his time creating mildly humorous cardboard messages that he presents on the street for tips.
In relation to the streets, urbanism—a cultural phenomenon that occurs within the city environment has been brought to a new level. Street begging in Vancouver has become an aspect of urban culture. The abstract of begging is similar to that of an art form which symbolizes a person’s creative ingenuity.
His communication towards the public is demonstrating his creativity through begging of semiotics. The uniquely humorous messages he displays arouse the audience or in this case intrigues the general public in a sense of originality.

Relating to production, style allows an individual to express themselves in a way that differs from the typical norm; in order to create an identity.
Joe has been transforming sympathetic cardboard messages into inventive humorous entertainment for 2 years now. He had resorted to innovative begging after being fired various times at his previous jobs. Joe had found a small stepping stone to advance beyond the general begging population. His ultimate goal is to be an actual comedian up on stage. He realized this when he was dismissed from his first job for goofing around.  He explains that “it is difficult enough scrounging for your next meal while trying to please people with a funny comment, but having to generate out of thin air a message humorous enough for people to tip you, is even harder.” He is struggling to survive on the street, while in the steady pursuit of his comedic career.

The section “BEGGING IN KINGSTON AND MONTEGO BAY,” in “Social and Economic Studies,” by George E. Simpson discusses the issues that pertain begging within Jamaica. Simpson mentions that the main interest of study within the written text was not the problems that were attained through begging, but rather the sociological reason behind it. As she states about begging in the 90’s “Monasticism provided the religious basis of beggary by teaching that gifts to beggars free one from sin, and, oppositely, that salvation may be attained by begging” ( p.197). Meaning that in the past they believed that ‘giving’ was considered more substantial than ‘receiving’ and that those who do beg will be granted redemption.

Joe states “the money I make on the street is everything; I try to save as much as I can in order to get by.” He explains that he tries to save time while collecting change from tourists, he thinks of what to write for his next message. He implies that he does not care if the next joke is not as funny as the last, because, in his experience, some of the public might find one message he wrote funny and the others not as humorous while the rest maybe chuckle. In the interview, he revealed although “it would be nice to make more money,” he does not care for how much he makes on his jokes; his only concern is surviving in the urban environment.  Joe is not aware of how to get out of his current situation. He implies that “he has been doing this for too long to know anything else.”

Simpson, G. E. (1953-2008). Social and economic studies. BEGGING IN KINGSTON AND MONTEGO BAY, 1-57, 197-211. Retrieved from http://www.jstor.org/stable/27850978?&Search=yes&searchText=begging&searchText=street&list=hide&searchUri=/action/doBasicSearch?Query=street+begging&gw=jtx&acc=on&prq=urban+labour&Search=Search&hp=25&wc=on&prevSearch=&item=5&ttl=10551&returnArticleService=showFullText
Spargo, R. C. (1961-2008 ). Studies in romanticism. Begging the Question of Responsibility: The Vagrant Poor in Wordsworth's "Beggars" and "Resolution and Independence", 39(1), 51-80. Retrieved from http://www.jstor.org/stable/25601431?seq=1&Search=yes&searchText=unique&searchText=beggars&list=hide&searchUri=/action/doBasicSearch?Query=unique+beggars&gw=jtx&acc=on&prq=unique+beggers&Search=Search&hp=25&wc=on&prevSearch=&item=16&ttl=4607&returnArticleService=showFullText&resultsServiceName=null